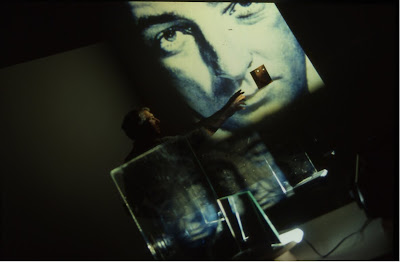 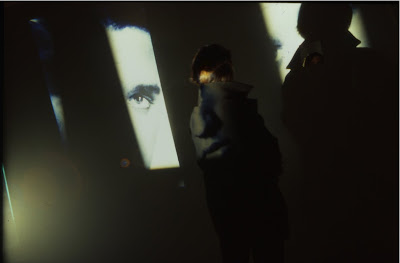 Observation object is a project that seeks to establish a dialog between the look of a stranger represented by a photographic discourse and the look of the spectator though their reflection. This scenario situates the issue of the power of transformation of the observer over the subject and emphasizes the change of behavior of the individuals that feel subdued by the insistent look of a hypothetical subject, although it is virtual. At the same time opens the question of who is the spectator and the spectacle.

This installation has a slide projector over a pedestal inside a glass showcase. The slides are projected over a double mirror located inside an urn. The urn is over a revolving platform that turns constantly. The effect that is produced is a set of images projected in opposite sides. These images cross each other and turn around the room. Also inside the showcase are projected images that appear to be floating in the air.

The images are black and white portraits of Hollywood actors and actresses. In all of them, they are looking to the camera, so in a way, they are looking at the spectator. The static and immobile look towards the spectator from the actors' portraits creates an opposite dynamic. They are usually the ones that are observed, not the ones that are observing. This creates certain perturbation in the spectators every day imaginary. This new relation between spectator and spectacle pose the question about who is the observation object. The shadows of the spectators are projected over the walls, when the lights of the portraits illuminate them. Some small mirrors, over the walls of the room, reflect the face of the spectators just at the same time that the slide is projected over their faces. 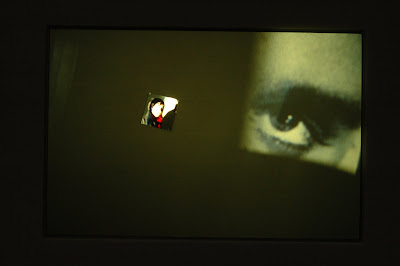